RK Tunes was first established in 2009 by Jordan.  The car that started it all was Jordan’s e36 325i.  Looking for more power, Jordan determined that turbocharging the car was the only way to go.  After a few thousand miles boosted, Jordan had his eyes set on an e36 M3.  He sold his 325i and shortly after found a 95 that would suit him well.

Of course, after a while, Jordan’s hunger for power was not satisfied with the 240 hp the 3.0 s50 put out.  He decided to go the same route as his previous e36 and turbocharge the car.  The car was outfitted with a blow through MAF setup and tuned to put out a healthy 450 whp/ 450+ ft/lbs of torque in 2010.

Jordan’s knowledge of FI and NA bimmers has grown exponentially over the years. Many of the cars are well known and highly respected throughout the BMW community. Some cars have been tuned to make as high as 947 whp.

Jordan’s current focus is on the newer generation of BMWs.  Whether the car is NA or FI, Jordan can provide you with a reliable tune that will increase power and drivability. Speed Industry is proud to carry their products! 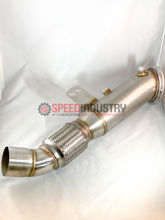