In 1947, three brothers along with their father started a small retail shop trading and selling automotive parts. From then on, their business grew into an automotive garage focusing on repairing radiators. With their engineering knowledge and rapidly growing business, the family opened up their own privately held radiator-manufacturing facility…

Fast forward to 1975… the CSF brand, still family owned, was established. CSF was the first company to introduce import applications into the automotive aftermarket as vehicles imported by Honda, Datsun, and Toyota started to show up in domestic showrooms and on American roads.

In 2009, the fourth generation of the CSF family joined the business. By this time, CSF had established a cooling industry reputation as the market leader of import and popular domestic radiators and condensers – selling over 650,000 units that year, even as the US economy was amidst a recession. To date, CSF has sold over 35 million units.

New niche and super specialized lines of cooling systems have been added and introduced by the company, including; commercial trucks, industrial and agricultural applications, marine coolers, intercoolers, pressure caps, and an innovative and industry-changing Racing & High Performance Division.

With our passion for cooling systems, and tubes and fins running through our veins; It was only a matter of time before CSF took its innovative ideas and leading technologies to the highest level – finally giving race car teams, drivers, and performance enthusiasts a product that performs just as hard as they do. 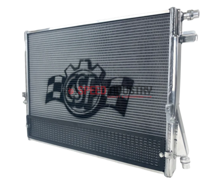